The Great Wall of China is one of the greatest wonders of the world and a UNESCO World Heritage Site!

With thousands of years of history and culture, runners can experience so much on their running journey.

Read more below about the interesting courses you’ll run through during the race!

This scenic area is located in Donggou, Liangjiawan Village, Daxinzhai Town, Funing County, at the foot of the Ming Great Wall, with Yanshan Mountain in the north, hills in the south, and the original ecological canyon of Liangjiawan in the east. It has streams that stretch for dozens of miles that meander through the valleys, surrounding the quaint villages. Since  Liangjiawan is located between mountains and hills, there has been no human development and industrial pollution before. The vegetation on the mountain is lush, the mountain streams are gurgling, and the spring water is so clear and sweet that you can even drink it directly from the stream!

The canyon’s natural environment is rare in eastern Hebei, with its rich mountains and rock formations and rivers that have the taste of the Huangshan Mountains in the north of Saibei. It is known that there are many relics of the Ming Dynasty on the Great Wall mountain. From the stone carvings of Qi Jiguang’s Shou Cliff to the magical Bingtang Valley that does not melt in the hot summer, this is a place you simply do not want to miss! Upon visiting the Liangjiawan Canyon, you might come across a steady stream of people, as it has steadily become more popular with photography, art/sketching and is a prime place for literature lovers. 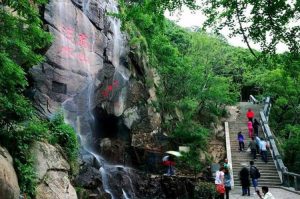 Depicted above is Huaguo Mountain. Photo credits to Youlin Website.

A bottomless cave, and a Monkey King, better known as Sun Wukong. According to the legend, it was in the East China Sea that Sun Wukong took the treasure in the Dragon Palace. If you visit here, you might spot several wild monkeys idling in the area.

In the Qing Dynasty, a Taoist built a double-decked pavilion in the cave. On the south side of the buddha statue, you can find a square pool on the stone wall. Above the entrance of the cave, there hangs a huge cliff.  In the past, there were thousands of springs gushing down from the top of the cliff, forming thousands of water lines, like a curtain of water faintly covering the cave, hence the name “Water Curtain Cave”.

In addition to the core scenery of Shuiliandong, you can see the winding and majestic Great Wall. The ancient local officials also marveled at the beauty of Huaguo Mountain, and erected a stele at the entrance of the Shuiliandong, engraving the poem “Jingdong Time and Place” describing the waterfall “the cliff is still a thousand feet tall”. 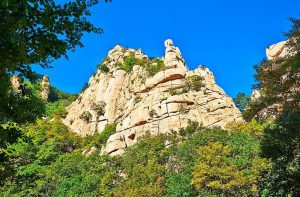 Depicted above is the Valley of Zu. Photo credits to StockFreeImages.

Zushan “Zu” Mountain is located in Qinglong County, Qinhuangdao. Since the mountain peaks to the north of the Bohai Sea and the east of Yanshan Mountain are formed by its branches, it is named as the “Ancestor of the Mountains”.  With its highest peak (Tiannv Peak), it makes its mark 1428 meters above sea level, making it slightly inferior to Mount Tai. Climbing Tiannv Peak, you might find yourself watching the sunrise in the east, the shadows of the sails in the south, with the Great Wall in the west, and overlooking the mountains in the north.

Although many visitors say that Zu Mountain has “strange and dangerous” mountain views, it is also said to have beautiful water scenes. Contemporary poet, Zang Kejia, praised these views as “Painting Realm Poetry Heaven”. Although Mt. Zushan is not well-known, its beauty might be a feat for us to discover and confirm. You, as a runner, might be interested in some of these famous scenic spots: Oolong Valley, Cloud Sea Buddha Light, Fairy Cloud Bed, and Feibao Valley. 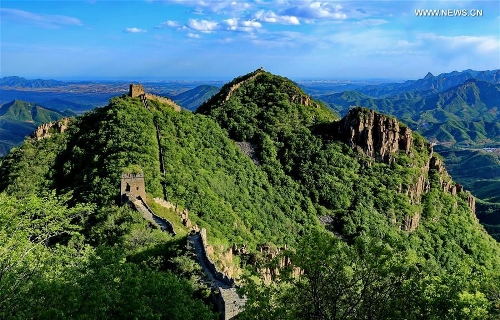 Depicted above is a grand view of Banchangyu of the Great Wall. Photo credits to GlobalTimes.

*Below are some recommendations for where to go when in the area:

A Must: Great Volcano Wall

Three Terrific: The Great Wall of the Ring

The first building of Jingdong in the Great Wall’s Six Great Walls is numbered as No. 162 Enemy Building in “The Great Wall”. It was originally named “Dajianlou”. It is the commanding height of the Banchangyu Great Wall. The top of the mountain is 880 meters above sea level. It is the tallest enemy building in the east of Beijing. The name is “Jingdong First Floor”. 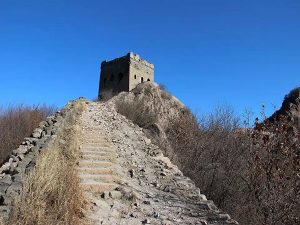 Depicted above is the Dongjiakou Great Wall. Photo credits to TopChinaTravel.

The Dongjiakou Great Wall stands atop the lofty mountains in the northeastern part of Zhucaoying Town, Funing County, Hebei Province. It is 38 kilometers away from the urban area of Qinhuangdao. It is one of the important barriers of the Jizhen Great Wall built by the famous military general Qi Jiguang in the Ming Dynasty. Guan”-the northern fortress of Shanhaiguan Guancheng. The Dongjiakou Great Wall was rebuilt on the basis of the original Northern Qi Great Wall. It was built in the 14th year of Hongwu in the Ming Dynasty (AD 1381). It was a second-class side wall at the beginning and was rebuilt by Qi Jiguang (Chinese military general and writer of the Ming Dynasty) in the fifth year of Ming Longqing (AD 1571) to a first-class side wall.

On the abrupt and dangerous mountains, there are 36 enemy platforms, 28 battle platforms, and 16 beacon towers. The total length is 8.9 kilometers, the highest point is 556 meters above sea level, and 3 castles are also built. It turns out that except for the castle, the rest of the scenic area is quite well preserved. The Great Wall in this area is built on the steep granite ridge, winding and majestic, with complete defense-in-depth and military installations. The beacon and smoke piers echo each other, showing the unique features of the Ming Great Wall’s military defense system in an all-around and multi-level manner. 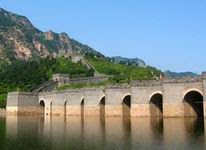 Depicted above is the Jiumenkou Great Wall. Photo credits to BeijingTravel.

The Jiumenkou Great Wall is located in Xintaizi Village, Lijia Township, Suizhong County, Huludao City, Liaoning Province, 10 kilometers away from Shanhaiguan District of Qinhuangdao City and 20 kilometers away from Qinhuangdao City, with a total length of 1,704 meters. Its southern end rises between the cliffs of dangerous peaks and connects with the Great Wall coming from Shanhaiguan.

Since then, the Great Wall has stretched northward along the ridge to the south bank of the local Jiujiang River. A huge bridge across the river was built on the Jiujiang River, which is 100 meters wide, to continue northward among the mountains. “The city walks on the water, and the water flows in the city.” This is how people describe the image of the Great Wall at Jiumenkou. “…see the red character on the mountain? That is saying the 9th Gate.” 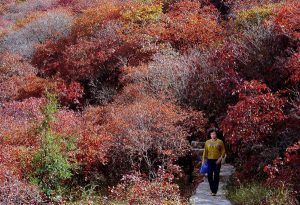 Depicted above is an autumn view of Changshou Mountain. Photo credits to ChinaDaily.

Changshou Mountain. also known as “Mt. Long Life”, is a national 4A-level scenic spot, a national forest park, and a national geological park. Leaning on the Great Wall in the east, bordering with Liaoning Province, bordering the “Little Guilin in the North” Yansai Lake in the west, Jiaoshan Great Wall in the south, and Yanshan ridges in the north, spanning 6.5 kilometers from east to west, it is a tourist attraction that combines natural and cultural landscape. 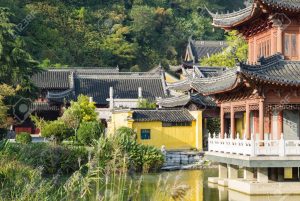 Depicted above is Jiaoshan in Zhenjiang City. Photo credits to 123rf.

Located about 3 kilometers north of Shanhaiguan City, Jiaoshan is the highest peak of the mountain barrier in the north of Guancheng, with an altitude of 519 meters. Its peak is flat-topped and can sit on hundreds of people. There are huge stone sacs, named like a dragon with a horn on its head. The main attractions are Jiaoshan Great Wall, Enemy Terrace, Jiaoshan Temple, Ruilian Pengri.

THE FIRST PASS UNDER HEAVEN 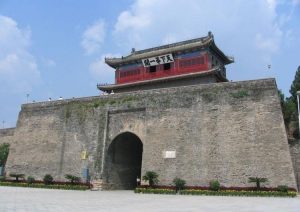 Depicted above is the Shanhai Pass Under Heaven. Photo credits to Quora.

Shanhaiguan, also referred to as Shanhaiguan District, also known as Yuguan, Yuguan, and Linluguan, is a demonstration point for the national civilized scenic tourist area. Located 15 kilometers northeast of Qinhuangdao City, Hebei Province, it gathers the essence of the ancient Great Wall of China. It is one of the northeast pass of the Ming Great Wall. Before 1990, it was regarded as the starting point of the east end of the Ming Great Wall.

The pass echoes with Jiayuguan, thousands of miles away, and is well-known all over the world. Shanhaiguan City, with a circumference of about 4 kilometers, is connected to the Great Wall. The city is 14 meters high and 7 meters thick. It has four main gates and various defensive buildings. The scenic area covers an area of 0.1 square kilometers, including the “First Pass in the World” Arrow Tower, Jingbian Tower, Muying Tower, Linlu Tower, Ruilian Pavilion Park, Wengcheng, Yiguan Square, and the 1,350-meter-long Plain Great Wall of the Ming Dynasty and other landscapes. It is named this because the scenic spot covers the landmark building of Shanhaiguan – “The World’s First Gateway Arrow Tower”. It is the most complete military defense system of the Great Wall so far. “The World’s No. 1 Arrow Tower”, also known as “Zhendonglou”, is the east gate of Shanhaiguan City.

According to the “Linyu County Chronicles”, it was repaired many times during the Ming and Qing Dynasties and repaired many times after the liberation. The building area of the tower is 198 square meters. The building has a single eaves roof in Xieshan, the four corners are decorated with ridge beasts of different shapes, and there are 68 arrow windows on the north, east and south sides. Above the arrow tower, the most eye-catching is the giant plaque “The First Pass in the World”. There are three plaques inside and outside the building.

A poem for The First Pass Under Heaven…

The edges and thin bones stand in the sky, reading the rain and wind all over the world.

The most broken part of the vicissitudes of life, Shuangfeng still looks red.

Falling down in autumn, revisiting the Zhuifeng and reiterating the vicissitudes of life Feng Lao Canglan travels to the old place, and frost has caused the building to be broken.

Zheng Honghan rains round the moon, and the leaves fall for another autumn.

Be the first one to hear our latest announcements, directly on your email. Subscribe today and we will keep you up to date!